This is a very complicated topic to demonstrate effectively. One could look at employment rates, literacy rate, life expectancy; it’ll just get out of hand. I want to know what the overall economic trend is for those living in the USA. Specifically I want to know if the value of someone participating in the USA economy is higher now than 50 years ago. I believe that looking at this trend may be useful in understanding how the current economic situation relates to the past. Overall it is desirable that the value per person in a country increases over time, as this could lead to improved economic quality of life.

Gross Domestic Product (GDP) has been useful metric for comparing the economies of different countries. It’s especially useful for understanding the relative scale of different economies. GDP represents the total gross value added by residents of a particular market. The GDP of the USA looks only at the economic contributions within the USA. Contributors to GDP include people, technology, natural resources, and intellectual property. Another useful metric is Gross National Income (GNI). From what I understand, the difference between GDP and GNI is that GDP is specific to a particular geographical situation, while GNI data looks at the economic ownership. If a USA resident owned a business in India, the value of goods produced from that business would count for GNI and not GDP.

I obtained the GDP and GNI (Atlas method) information from The World Bank of the USA between 1960 and 2014. I then plotted the data using Python; you can see the plot below. 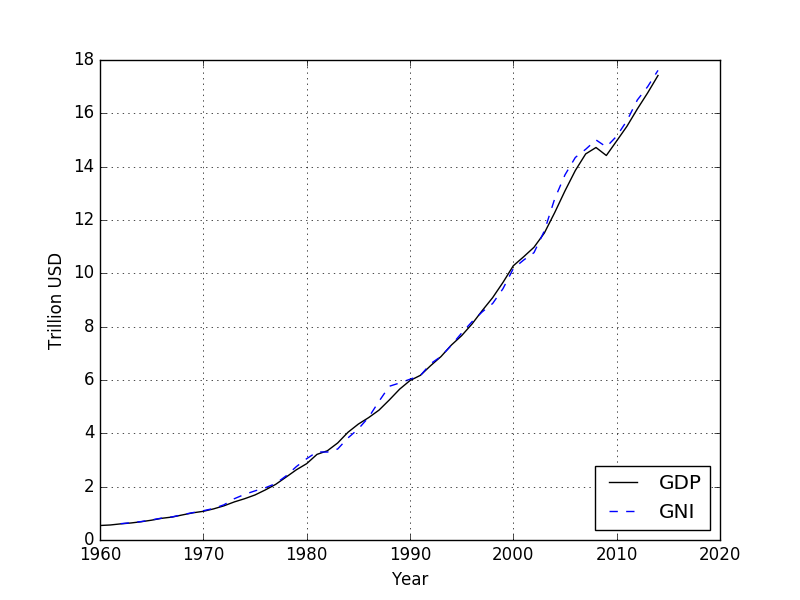 Well we can clearly see that the GDP and GNI are increasing exponentially. This is largely due to inflation. Additionally just looking at the GDP and GNI levels isn’t a good enough sign of improvement. One of the largest contributors to GDP is the number of people participating in the economy. Naturally when the population increases there will be additional consumption and production from the extra people. We know the population of the USA is vastly different in 2014, than what it was in 1960. So what we actually want to use is a per capita metric to compare economic situations.

This is all fine. The World Bank includes population data for the USA as well. So if we take the GDP and GNI data I have collected, and divide each by the population of the year, we end up with GDP per capita and GNI per capita. The GDP per capita effectively demonstrates the value of each resident of an economy. Together these metrics can be related to the average gross income of residents in a country. 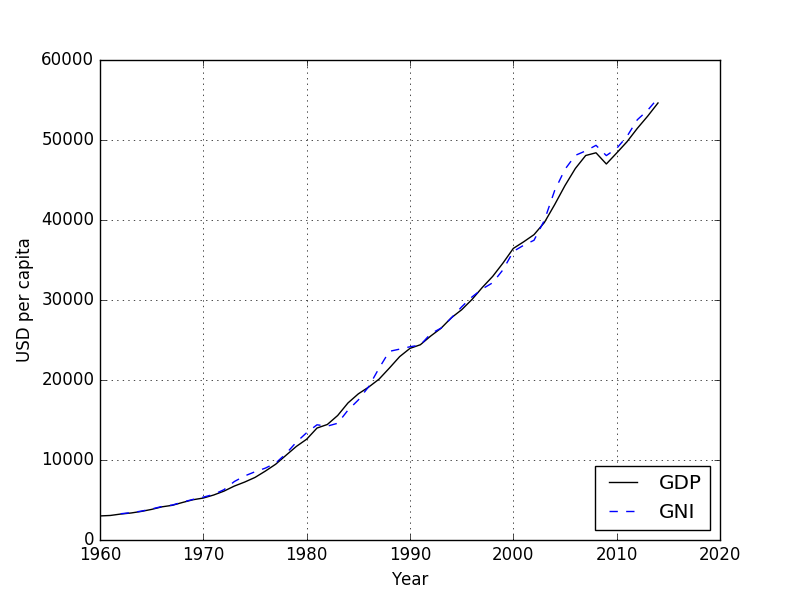 The plot of the per capita GDP and GNI has the same exponential trend as the plot of just the GDP and GNI. We know that the US Dollar (USD or $) has inflated in value since 1960. In order to understand if GDP per capita is increasing, we’ll need to adjust for inflation.

I adjusted the GDP per capita and GNI per capita plot for inflation with the CPI values, such that all prices are in 2014 US dollars. The plot can be seen below. 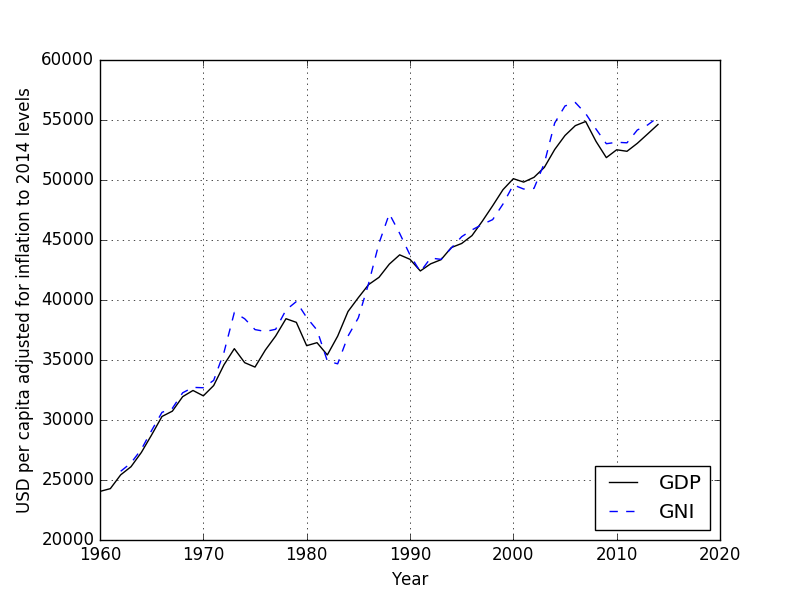 When we look at the GDP and GNI per capita values adjusted for inflation, we see that overall both GDP per capita and GNI per capita in the USA have been increasing steadily from 1960 through 2014. This is overall a good sign, and it doesn’t appear that the values have hit either a plateau or peak yet.

What happens if the CPI is wrong? 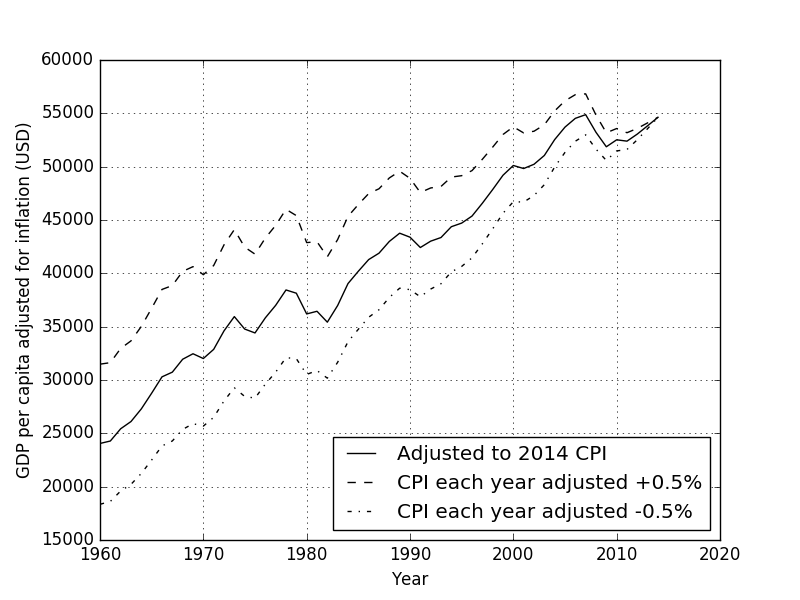 Overall 0.5% in one direction or the other sounds small, but what would the GDP per capita look like if the error in our inflation measure were even larger? I made a plot below assuming that the CPI value has been over and under estimated by 1.0% since 1960. 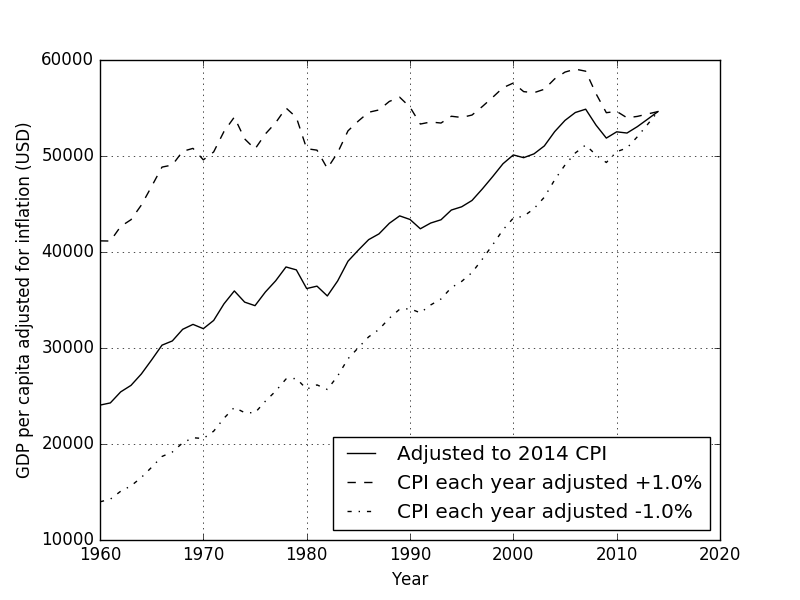 So what would happen if we increase the error in the CPI value to let’s say 2.0% each year. 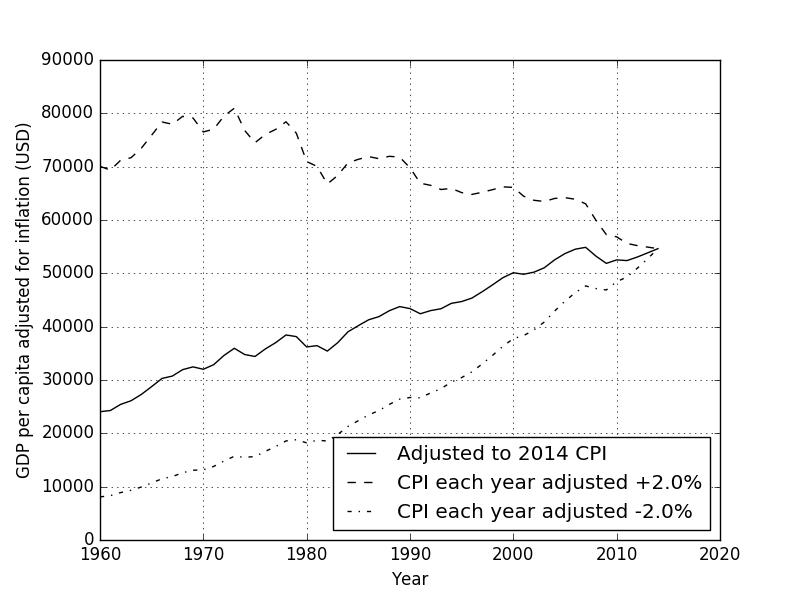 If the CPI has been underestimating inflation by just 2.0% each year, the scary situation where GDP per capita is actually decreasing overtimes begins to appear. Again it’s important to state that these represent worst-case scenarios where the CPI is consistently either over or under estimating the real inflation rate. What is likely the case is that sometimes the CPI is an overestimation of the inflation, and other times the CPI is an underestimation of inflation. Overall I would expect the real GDP per capita of the USA to be somewhere between the lower and upper lines in the plots shown.

GDP per capita and GNI per capita were calculated for the USA between 1960 and 2014. These measures represent the economic performance per person in the USA over time. It is important to adjust the data for inflation, as the US dollar has significantly weakened over the last 50 years. For this work, the metrics were adjusted for inflation using the BLS’s historic CPI values.

The overall trend is that the GDP per capita in the USA is increasing over time. This appears to be true form 1960 - 2014. Increasing GDP per capita is a good thing, and can mean that people are producing and consuming more. Additionally this can mean to an increase in compensation, because the value at which workers produce is higher.

All of the code I used to process the GDP and GNI data is available on GitHub.