Edit 2019-05-09: The benchmark has been updated to include the latest CuPy syntax for cupy.linalg.lstsq.

CuPy is a GPU accelerated version of NumPy that is very easy to use. I just submited a PR which adds cupy.linalg.lstsq, and naturally I wanted to compare the least squares performance to numpy.linalg.lstsq. I also compared tensorflow.linalg.lstsq as a reasonable alternative. Hopefully this will provide some insight into when it will pay off to solve least squares problems with CuPy instead of NumPy.

I only have one computer that I was able to run this on so far. I’ll update the post if I can run this benchmark on different hardware.

NumPy and CuPy use singular value decomposition (SVD) to solve least squares problems. NumPy defaults to the gelsd lapack routine which is a divide-and-conquer SVD strategy. TensorFlow’s lstsq defaults to using a Cholesky decomposition which should be faster than SVD.

I have a small benchmark problem which performs piecewise linear least squares fits to a sine wave. The benchmark performs fits with known breakpoint locations for 6 and 20 line segments (which translates to solving least squares problem for 6 or 20 unknown parameters). The number of data points was varied from 100 to 6,309,573. This is an odd number, because I couldn’t solve 10**7 data points in the 12 Gb of my GPU’s memory. The code to run the benchmark is available here, and the process to run the code was

This code basically runs the following:

I’ve ran the benchmark on the following computers:

The results below compare the run time of the fits against the number of data points. The vertical error bars denote the 10th and 90th percentile, considering a Normal distribution with 90% confidence (from the 10 replicate runs). 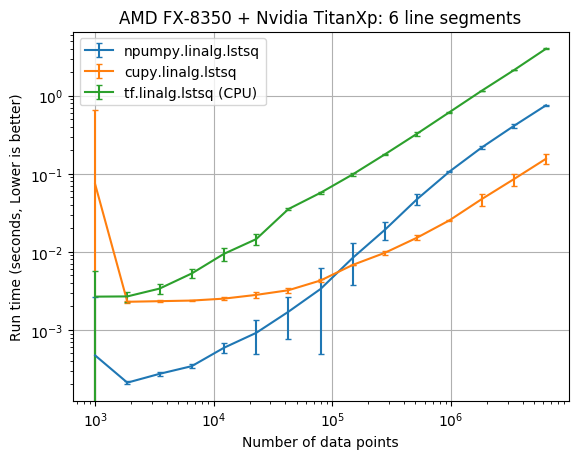 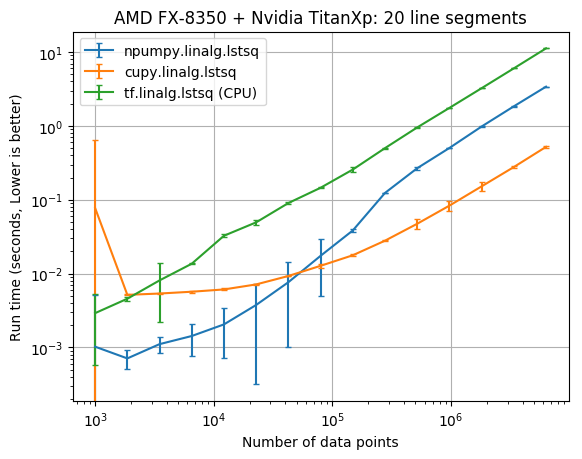 I should really run this benchmark on a computer with Intel CPU + NVIDIA GPU. Especially since a previous post hinted that TensorFlow performs significantly better on an Intel CPU, and a Cholesky decomposition should be faster than SVD.

NumPy was built from source using Intel MKL on the AMD FX-8350 which isn’t the fastest, however it is the best supported…

The TITAN Xp used for this work was donated by the NVIDIA Corporation.